The Multiple Track Mind – How to Stay Focused on Critical Reading Exams.

Home » The Multiple Track Mind – How to Stay Focused on Critical Reading Exams.

Here’s another blog post I did for Victory Step a while back, on the topic of practicing a Multiple Track Mind.

I was recently driving to teach a class at Victory Step when I realized something unsettling. I was cruising along the tollway at seventy miles an hour, winding around tight curves, squished in the middle lane between a Porsche, a Subaru and a Toyota, when it hit me: I realized I hadn’t been paying attention at all for the past few miles. I had no recollection as to how I had come to where I was. I knew I must have driven north past 635, but my mind had been on autopilot. I was so lost in thought that an alien space ship could have swooped down and shown its tractor beam down and abducted the car in front of me and I wouldn’t have noticed.

I’m not a reckless driver. Far from it, I follow the speed limit, obey traffic laws, and am courteous and respectful to my fellow drivers. But, unbeknownst to me, I had let my mind wander and I wasn’t even paying attention to what was going on.

I thought about it and realized this is actually kind of a common phenomenon. You are sitting somewhere, a restaurant, an airport, and you suddenly become aware of the present moment. Aware of how lost in thought you were up until that moment. I’ve asked my students before and most of them have admitted that there have been times when they have been reading a paragraph and they suddenly realize that they have absolutely no idea what they just read. Of course you actually read it, but you couldn’t tell someone for the life of you what actually happened.

This phenomenon is one we address at Victory Step when preparing our students for the SAT. Think how dangerous it is to read through a whole passage on a test that measures reading comprehension and not remember one lick of it. And it happens easily too, especially when you’re two and a half hours in and you’re reading a passage from Charles Dickens’ Great Expectations and you have no bloody idea what every fifth word means. You know there’s some guy named Pip, and he’s in London, and he is trying to kill some guy named Magwitch (or was it the other way around?). A wandering mind comes easily, and at a great cost to your score.

This concept is taught as the “Multiple track mind.” And when the tracks aren’t lined up, like what happened to me on the highway, you’re not really paying attention. Now, we have to come clean. The notion of the “Multiple track mind” was not created by Victory Step. It is a concept that has been expressed in different time periods in different ways. It is thousands of years old. The Buddha’s teachings concerned mindfulness, consciously paying attention to one’s thoughts. That there is the mind, and then consciousness of the mind. Two Tracks. Freud defined the mind as a complex entity comprised of ego, super-ego, and id, disparate parts of the mind that sometimes do not line up.

A simple way to think of this is that there is the thinking mind – or the intellect, and then there is the simple mind of awareness. Your day to day thoughts originate from the thinking mind. The thinking brain processes information, thinks about things, weighs your options and then executes them. Much of your self-identity comes from the intellect. The simple mind is different – subtler. It is more about awareness. It is less conceptual and more intuitive. It doesn’t think but it is aware. It was awareness I was lacking on the highway. My intellect was running a mile a minute but it wasn’t attuned to the present moment. It is very BAD when this happens on the SAT.

Learning and understanding this concept will help you on the SAT. I oft repeat that the SAT is not solely a measure of intelligence. Only fifty percent of the difficulty on the SAT stems from actual knowledge. The other fifty percent stems from the grueling and painstaking nature of taking a four hour long test. The SAT tests knowledge alongside mental endurance and focus. So, it is beneficial for a student to become accustomed to the patterns of her own mind. In this way she can use her mind in a more efficient way, and minimize time wasted in a mind where the multiple tracks are not aligned. She will feel when she starts becoming sleepy, she will tell when her mind starts to wander, when she needs to refocus, or when she needs a mini-break. She catches herself not comprehending the passage after one paragraph, not five. We train our students to become more aware of what they are reading. We have them unite the two tracks of their mind by asking themselves questions as they read through the passage. “What is going on in this passage? What is the author trying to convey? What are the main themes?” In this way the intellect becomes united with the simple mind, the literal words with their cerebral significance. The Multiple Track Mind.

Ultimately, we at Victory Step cannot teach you everything you need to know on the SAT.  We can’t fit a decade of basic academic ability (readin’, writin’, and rithmetic’, which are coincidentally the only things the SAT tests) into a 6 week class. What we can do though is to teach you strategies to become more effective at applying your academic abilities to the stressful and ungainly format that is the 4 hour Scholastic Aptitude Test: Teaching the Multiple Track Mind. You will need the two tracks of your mind to work together. Every minute wasted is precious points you can lose. Bringing greater awareness to the workings of your mind and practicing reading with focus is a great way to work your mind out. It’s like dead lifts for the intellect. 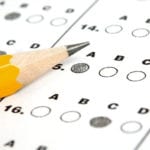 Why is SAT Prep So Important?

What is the SAT? It is a standardized test that students must take in order to apply to most colleges. It tests students’ mastery

By: Dallas Admissions Intern It’s June 6th. Many of you guys have already graduated high school, and the rest of you are waiting anxiously